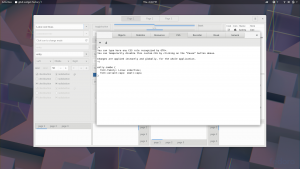 A few years ago, I wrote a post about scrolling in GTK+ 3. Time for another look!

The basic idea of the changes described back then is still the same. We expect touchpad (or track point) scrolling to be one of the most common forms of scrolling, and the scrollbar operates as a narrow indicator for this.

As you can see, we change the cursor to indicate scrolling, and it you can freely scroll in all directions. It is kinetic, too.

Of course, it is still possible to just click and drag the slider, for classical scrolling.

Another aspect of ‘classical’ scrolling is that you can click on the trough outside the slider, and either warp the position to where you clicked, or jump in page-size increments.

The typical keyboard shortcuts (Page Up, Page Down, Home, End) let you control scrolling with the keyboard.

There’s more to scrolling in GTK+ that you may not know about. One feature that we introduced long ago is a ‘zoom’ or ‘fine adjustment’ mode, which slows the scrolling down to allow pixel-precise positioning.

To trigger this mode you can either use a long press or shift-click in the slider. As you can see in the video, once you move the pointer below or above the scrollbar, it will keep scrolling at the same relaxed speed until you let go.

As a variation on this theme, more recently we added a variable speed variant of smooth scrolling.

To trigger it, you secondary click in the trough outside the slider. Once the scrolling starts, you can control the speed by moving the pointer closer or farther away from the scrollbar. This is pretty addictive, once you’ve discovered it!

As the last feature, applications can add a context menu that gets triggered by secondary click on the slider, and make it scroll to important positions.

Thats it, scroll on!