The GTK+ team had a full day planning session during the BoF days at Guadec, and we had a full room, including representatives from several downstreams, not just GNOME.

We had a pretty packed agenda, too. 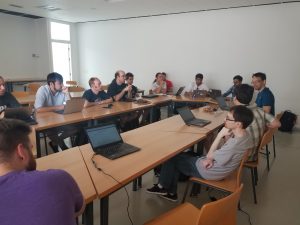 We started out by reviewing the GTK+ 3 plans that we’ve outlined earlier.

In addition to what was mentioned there, we also plan to backport the new event controllers, to make porting to GTK+ 4 easier. We will also add meson build support to help with Windows builds.

The 3.24 releases will effectively be a continuation of the 3.22 branch and should be entirely safe to put out as stable updates in distributions.

The bulk of the day was taken up by GTK+ 4 discussion. We’ve reviewed the list of leftover tasks on the roadmap:

Noticeably absent from this list are a few things that were on the roadmap before:

All of these can still happen if merge requests appear, but we don’t think that we should block on them. They can be developed externally to GTK+ 4, and become GTK+ 5 material.

We spent some time evaluating the state of GDK backends in GTK+ master.

The Windows backend is in OK shape. We have several people who help with maintenance and feature development for it, meson makes building it a lot easier, and we have ci for it.

The Quartz backend is in a much worse state. It has not been kept in buildable shape, nobody is providing fixes or feature development for it, and we don’t have ci. We had a macbook offered that could be used for ci, and it was suggested that we could use travis ci for the OS X.

We spent a long time on this, and did not reach a 100% consensus, but it seems realistic to aim for a GTK+ 4 release in spring of 2019, if we keep making good progress on the outstanding leftovers.

When we release GTK+ 3.96, we will also announce a date for GTK+ 4.0. We hope to be able commit to release before GNOME 3.32, so GNOME application developers can switch their master branches to GTK+ 4 without worrying about whether that will disrupt other development for 3.32.

We really want feedback from application ports at this point. But we are in a bit of a difficult position, since we can’t plausibly claim to be done with major API work until the GtkToplevel and shortcuts controller work is done.

Our recommendation to app authors at this point is:

In the afternoon, we spent a while talking about GLib. We went over a laundry list of larger and smaller items. Notable highlights: GProperty may happen for 2.60 and we may be able to use g_autoptr soon.

We discussed a great number of other things that we could and should do.

For example, it was suggested (and generally agreed to) that we should merge gsk into gdk, since it is small and the internals are somewhat intertwined. It was also suggested to create subdirectories in gtk/, for example for the css machinery.

Next September, GLib will hit version 2.58. There have been a few changes during the past two development cycles, most notably the improvement of the Meson build, which in turn led to an improved portability of GLib to platforms such as Windows, macOS, and Android. It is time to take stock of the current status of GLib, and to highlight some of the changes that will impact GLib-based code.

There have been lots of contributions in GLib, in this past cycle, thanks to the tireless efforts of Philip Withnall; he’s been instrumental in reviewing patches, triaging bugs, and implementing changes in the development process of the project. The switch over to GitLab has also improved the contribution process, with many more developers opening merge requests:

Make sure to test your code with GLib 2.57.2, the next development snapshot towards the 2.58.0 stable release.