This week, we released GTK 3.96.0. Again, it has been a while since the last release, so it is worth summarizing whats new in this release. There is really too much here to cover it all, so this post will only highlight the most important changes.

This release is another milestone on our way towards GTK 4. And while there are still some unfinished things, this release is much closer to we hope to achieve with GTK 4.

GSK has seen a number of bug fixes and new tests that are made much easier using a new debug tool, gtk4-node-editor. It can load and display serialized render node trees, such as this one that was saved from the GTK inspector, and compare the output of different renderers. 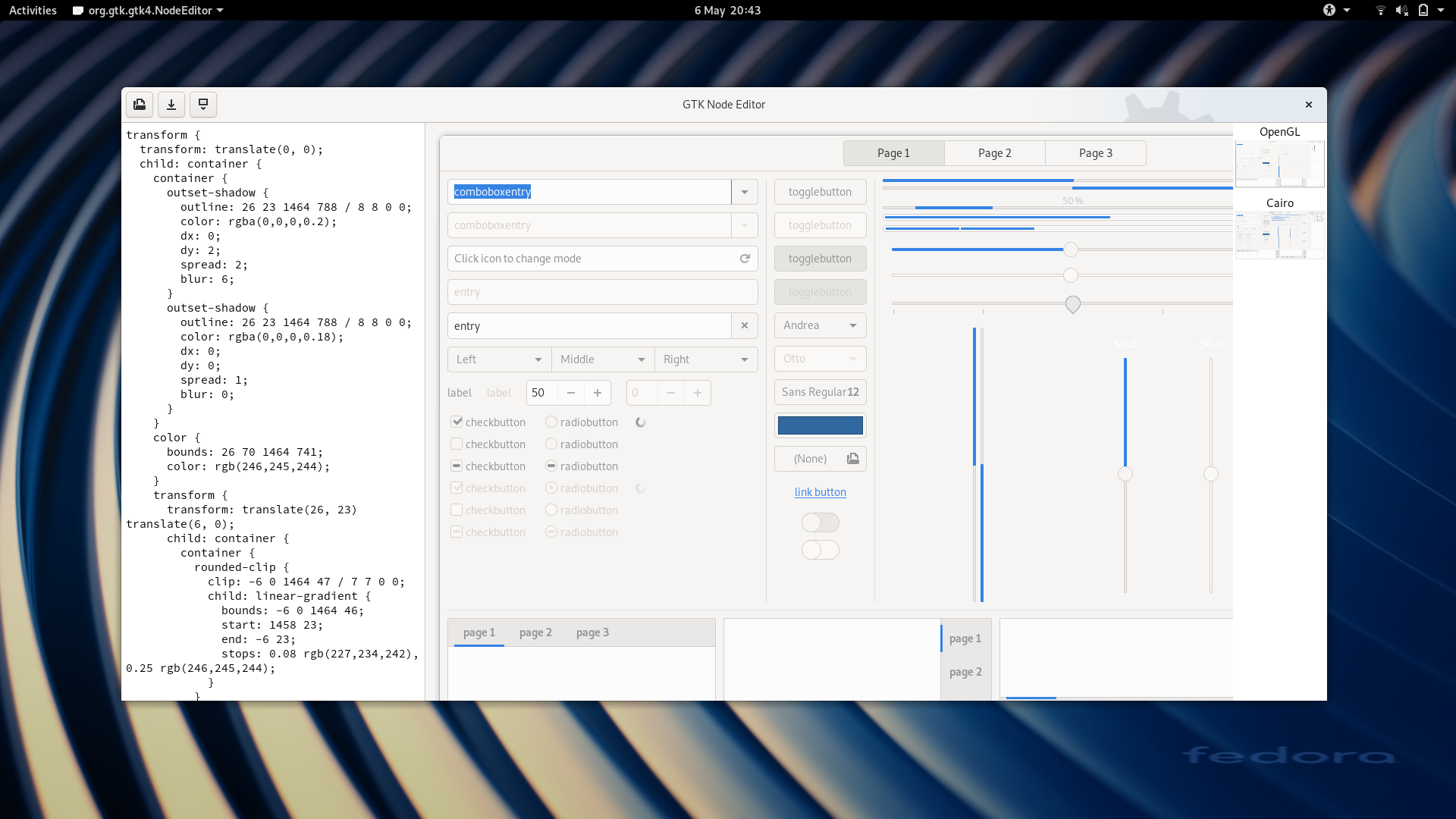 The 3D transformation support has been brought up to the level where we can do animated transitions like the cube spin below. 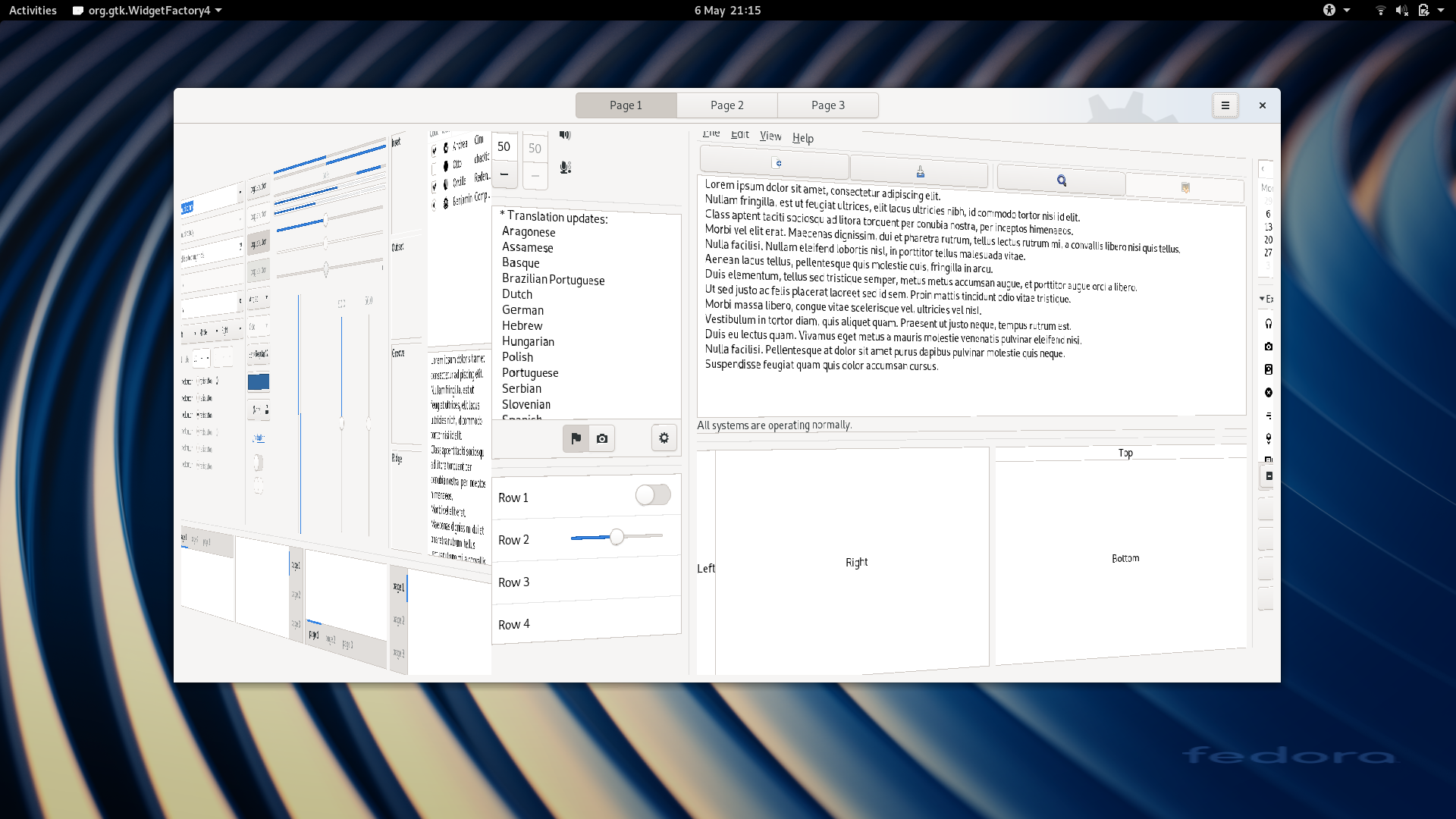 The trend to move toward Wayland inspired APIs has continued, with more X11-only apis being moved to the X11 backend or just removed. Use of child surfaces and global coordinates has been greatly reduced, but this work remains incomplete.

The refactoring of Drag-and-Drop has also continued, with the introduction of GdkDrag and GdkDrop objects. The GTK part of this refactoring is still incomplete.

The Wayland backend has gained support for the Settings portal for GtkSettings, and uses the text-input-unstable-v3 protocol for its input method support.

One big change for custom widgets is the introduction of GtkLayoutManager, which is a new delegate object that takes over size allocation. Layout managers can optionally use layout children for holding layout properties. This replaces the layout-related child properties in GTK containers such as GtkBox or GtkGrid.

A number of layout managers are available:

More layout manager implementations will appear in the future. Most prominently, work is underway on a constraints-based layout manager.

GtkAssistant, GtkStack and GtkNotebook have publicly
accessible page objects for their children. The page objects
are also exposed via a list model. They non-layout related child properties of these containers have been converted into regular properties on these page objects.

The core GtkEntry functionality has been moved into a new GtkText widget, which also implements an expanded GtkEditable interface. All existing entry subclasses in GTK have been turned into GtkEditable implementations wrapping a GtkText widget. This also includes a new GtkPasswordEntry.

GTK widgets can transform their children using projective linear
transformations. This functionality is available in CSS and
as a GskTransform argument to gtk_widget_allocate. GtkFixed is
the first container that exposes this functionality. For further examples,
see the swing transition of GtkRevealer, the rotate transitions
of GtkStack or the Fixed Layout example in gtk4-demo.

GtkBuilder can specify object-valued properties inline, instead of referring to them by ID, and the simplify command of gtk4-builder-tool has gained an option to automatically convert GTK 3 UI definition files to GTK 4.

For more information on the things that are still still coming for GTK 4, find us on Discourse, IRC, or look here.