The GTK 3.99.2 release continues the topics from 3.99.1: api cleanup, new and polished demos, better documentation. You can see the details here.

One small note on the topic of documentation is that we are relying on some unreleased gtk-doc features. Therefore, we now include gtk-doc as a subproject in the gtk release tarball. If you are a distributor, don’t be surprised that building GTK installs gtk-doc tools now.

The big news in this snapshot is our work on exposing the power of the new GL-based rendering stack a bit more.

The demo using a GtkGLArea widget to run GLSL snipplets that are compatible with the ones found on shadertoy.com. Many of the examples found there will work, if you paste them into the editor of this demo.

This is fun, but somewhat limited. The GLSL is confined to its ‘sandbox’, the GtkGLArea widget, which is using GL api to compile and use the shaders.

This is not our first attempt to make a shadertoy lookalike. When we first looked at it, we thought that we would make a shader abstraction that applications could use. We put it to the side when it turned out that making it work across different renderers and backends would require us to write our own shader compiler—too much work.

But after our shadertoy success, we revisited the idea of shaders as first-class objects, with more modest goals: We use GLSL, and don’t attempt to make the shaders work with anything but the OpenGL renderer.

With these pieces in place, we made a demo that shows various uses of shaders. It is maybe a bit overloaded, and some of the effects are a bit over-the-top, but it gets the point across: you can use shaders in your widgets.

What we haven’t done yet is adding widgets that have shader support built-in. The demo showcases a few likely candidates:

A shader paintable. As you may recall, GdkPaintable is a very flexible interface for anything that can ‘paint’. Shaders certainly qualify. The GskShaderPaintable in gtk-demo uses a shader without input textures to just produce pixels, and we add it to a GtkPicture widget to make it appear in the widget tree.

A shader bin. This is a very simple container that can use shaders to draw effects on top of a child widget. It works with shaders that take a single input texture (for the child widget).

A shader stack. This is a stack-like container that shows one of many child widgets, and uses a shader for the transition whenever the visible child changes. It works with shaders that expect two input textures (for the old and new active child).

Thankfully, making custom widgets is a lot easier in GTK 4 than it used to be, so the render node API should be enough to get you started on some fun experiments. You can of course take the gtk4-demo code as a starting point.

You can debug it

Apart from widgets, the shader support is fully integrated. The GTK inspector can handle shader nodes like any other render nodes, you can serialize them and e.g. load the resulting file in gtk4-node-editor: 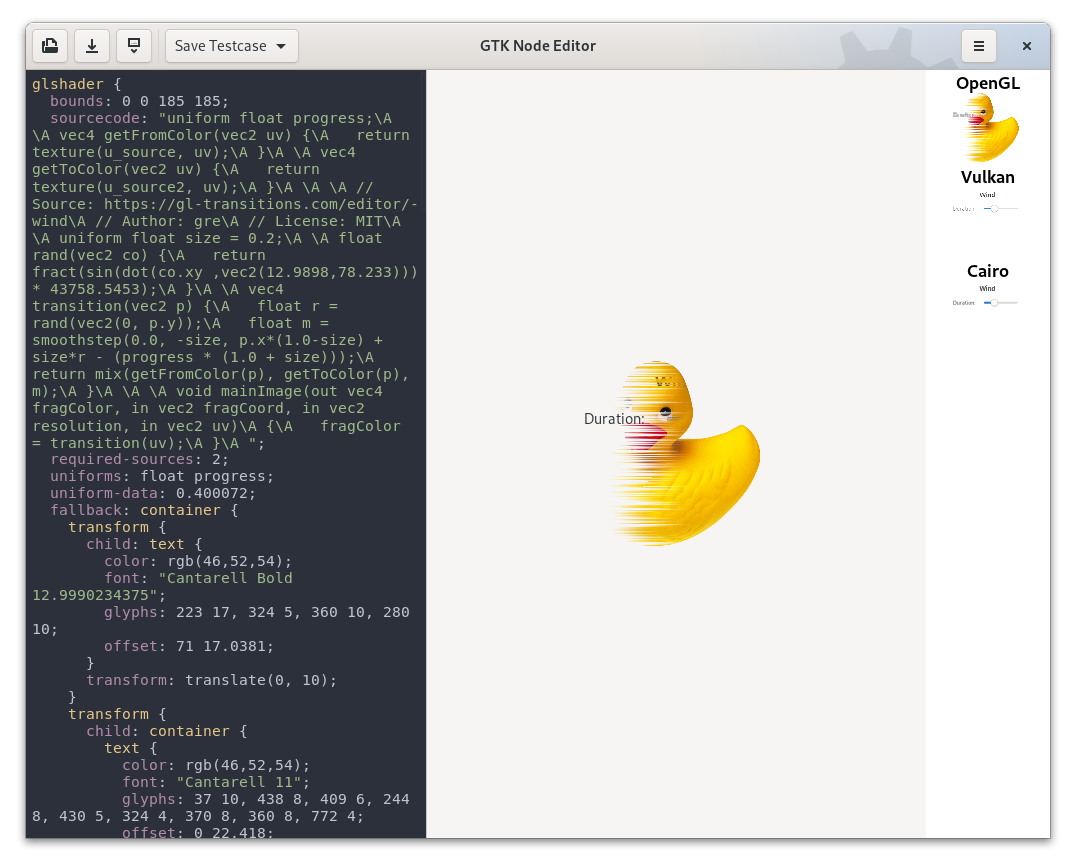 If you need to see the input that GTK sends to the shader compiler,  setting the environment variable

After this GL adventure we’ll now focus on landing more of the new accessibility infrastructure.