GTK 4 has been a colossal, multi-year development endeavor that started in October 2016 and ended in December 2020. Now that the 4.0 release is finally out, it’s time to look back to the incredible amount of work done by hundreds of contributors over these four years.

Back in 2016 we were definitely a bit optimistic on the time table, and thought we would be able to release 4.0 in three years, by the end of 2019. The plan was to start by changing the rendering pipeline of GTK, by moving it to a retained graph of operations that could be submitted to the GPU, as opposed to the immediate mode rendering that we had since the very beginning of the toolkit, and which survived two major API cycles—first by abstracting Xlib drawing commands, and then by moving to Cairo operations. Of course, we also knew we wanted to improve other sub-systems, like input and the windowing system API, to move away from X11-isms and towards a design more in line with the requirements of Wayland (and other windowing systems). What we got, after all was said and done, is a deep redesign of the internals of the toolkit, as well as a different programming model that favors more delegation through ancillary objects, and fewer leaky abstractions and deep type hierarchies; additionally, we pared down the exposed internals, to ensure that the toolkit, and the applications using it, will be more maintainable in the future. The downside is that GTK is less of a “meta toolkit”, whose internal state can be poked at from the outside while expecting to work across multiple releases; that approach was, in the long term, unsustainable given the available resources, and left us unable to optimise or improve the internals of GTK, to the detriment of every user.

We don’t expect the next major development cycle to take this much time, but you know as they say: no plan of operations extends with any certainty beyond the first contact with the main hostile force. The important thing, though, is that we still see potential for improvement; and while we want to celebrate the release of GTK4, as well as everyone who contributed to it, we also want to communicate that the plan outlined in 2016 is still very much in effect. We already started collecting items for a GTK5 development cycle in our GitLab project page, and we plan to have more discussions with various stakeholders for future work in that direction. 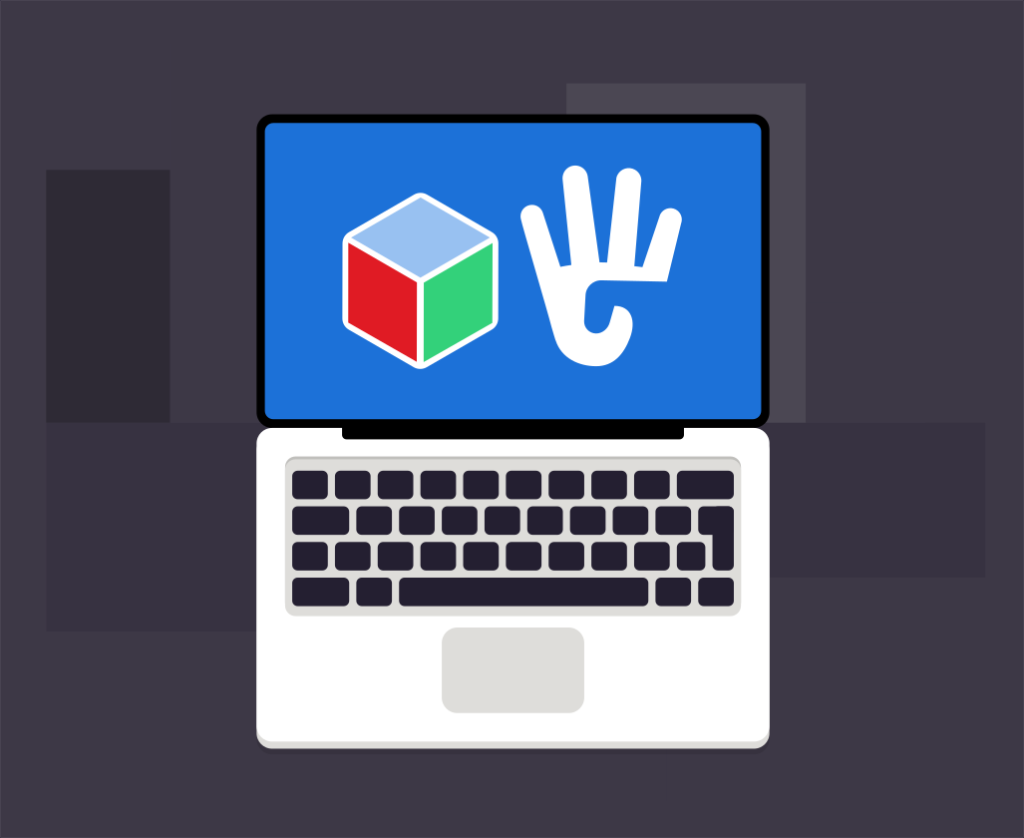 The most interesting thing is that, for all that work, we ended up with a total of 50 lines of code removed from the existing code base, which includes tests and documentation. 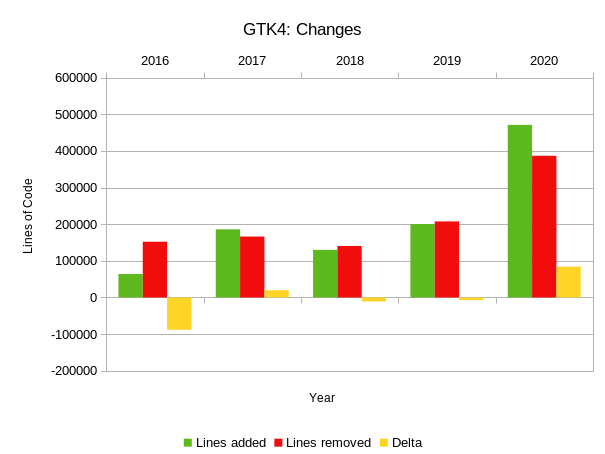 We only had a couple of months in 2016, and the largest effort between October and December was the removal of the deprecated API, and various changes to cope with the renaming from GTK3 to GTK4. Nevertheless, GSK initially landed in November/December. On November 21st, GTK 3.89.1 was released, the first development snapshot of the new GTK 4 API.

In 2017, GSK had with multiple iterations over its API: new render nodes were added to implement CSS drawing primitives, and widgets were moved to the GtkSnapshot API from the old Cairo rendering primitives. Additionally, the new clipboard API was introduced, with a stream-based implementation. On March 31st, GTK 3.90.0 was released, followed by 3.92.0 in October.

In 2018, things seem to slow down, but mostly because we moved to GitLab. Suddenly, we had access to a CI pipeline and merge requests, and we became progressively more confident in our development process; lots of work happened in development branches, especially large refactorings, like the renaming of GdkWindow to GdkSurface; the move to GtkGesture objects and the removal of per-widget event signals; or making leaf classes not derivable. GTK 3.94.0 was released in June.

In 2019, development pace picked up once again:

Plus, of course, lots of performance and functionality improvements in the rendering pipeline. GTK 3.96.0 was released in May. 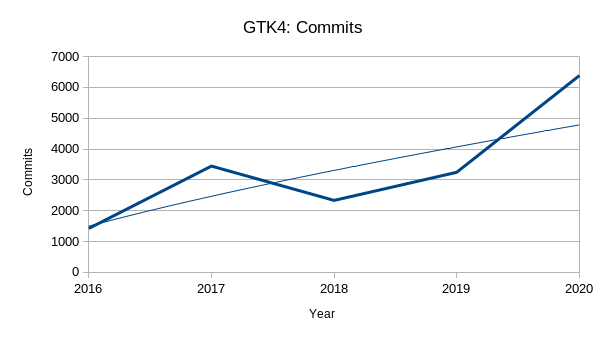 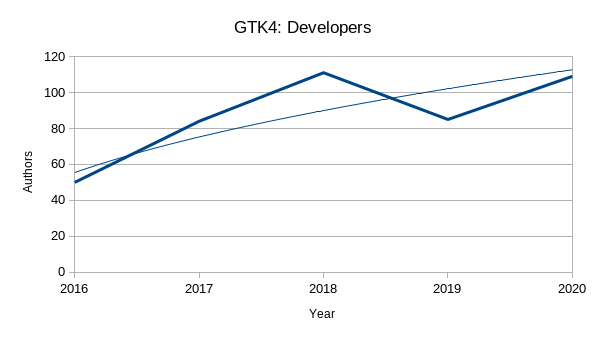 As usual, Matthias towers over every other contributor, both in terms of sheer number of commits and in terms of code changes.

While Red Hat employees affect the most changes, we still have a very large number of contributors from the community—both using their GNOME email address and using their work address even when contributing on a personal level. We also have multiple contributors from various companies in the GNOME and free software at large ecosystems, signalling a healthy community around the project.

Comparing numbers with GTK3 is a bit more tricky:

¹ – Paid staff of the GNOME Foundation. 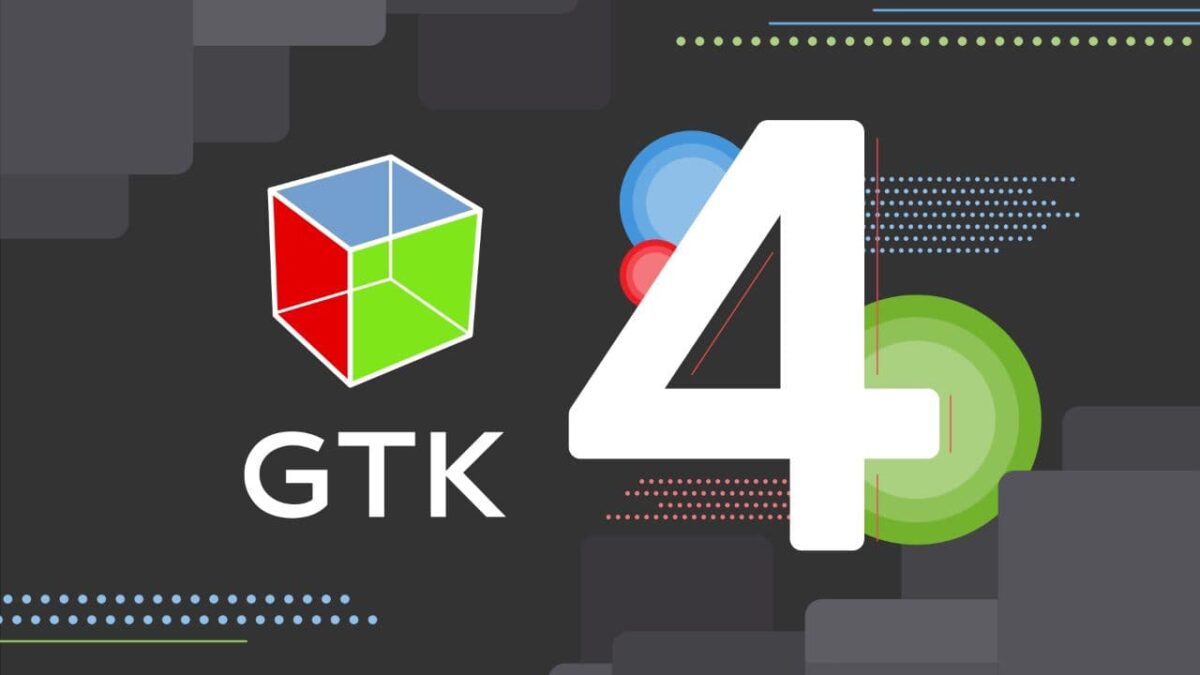 GTK 4.0 is the result of a lot of hard work by a small team of dedicated developers. We will have a separate post to go over the statistics, but the short summary is that since the 3.89.1 release in November 2016, we’ve added over 18000 commits and made more than 20 development releases.

Congratulations and a big thank you to everybody who has participated in this effort, and in particular to Benjamin, Emmanuele, Timm, Carlos, Jonas and Christian!

It is impossible to summarize 4 years of development in a single post. We’ve written detailed articles about many of the new things in this release over the past year: Data transfers, Event controllers, Layout managers, Render nodes, Media playback, Scalable lists, Shaders, Accessibility.  Here are some of the highlights, in visual form: 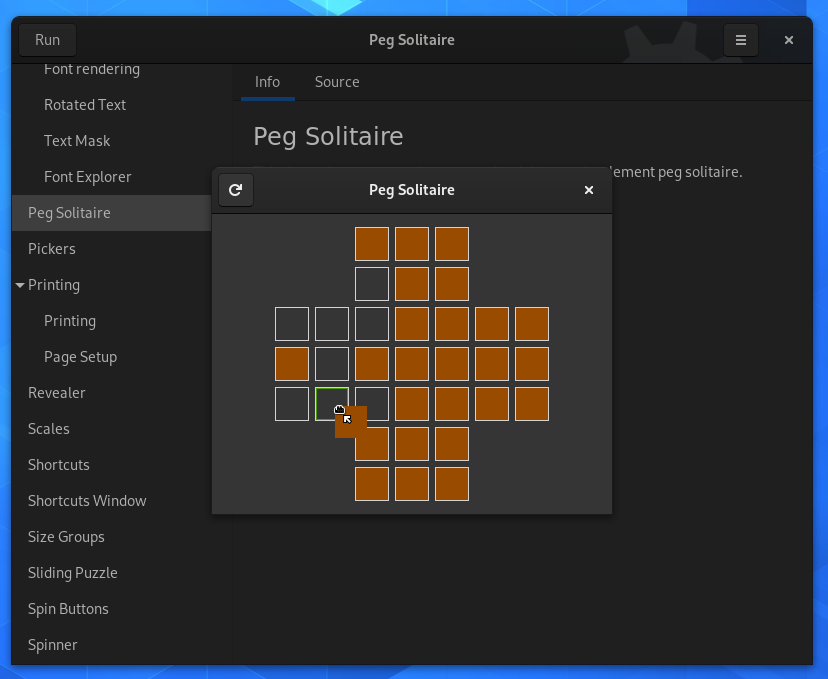 GTK 4 is now stable, and we consider it ready for consumption. That does not mean GTK 3 is dead – we will continue to support and update it for the foreseeable future (the latest release, 3.24.24, quietly went out a few days ago). It does mean, however, that GTK 2 has reached the end of its life. We will do one final 2.x release in the coming days, and we encourage everybody to port their GTK 2 applications to GTK 3 or 4.

How to get it

The source tarballs are available in the usual place. Binary packages should appear in major distributions soon.

The GNOME 40 release will have a number of applications ported to GTK 4.  If you want to try GTK 4.0 today, you can use the nightly flatpak builds of gtk4-demo and gtk4-widget-factory:

If you are itching to port your application to GTK 4, our migration guide is available as part of the documentation.

How to support GTK

GTK could not be developed without the many volunteers who contribute bug reports, patches, translations or ideas. Thanks to all of you. We are also grateful to the GNOME foundation for supporting GTK with development resources, infrastructure, and travel assistance.

Donating to the GNOME foundation is a good way to support future GTK development.

We are very thankful for all the early testers that have provided us with bug reports and feedback, which made this release much better. But we fully expect that there will be a quick 4.0.1 release to fix up the oversights and gotchas that only come to light after a .0 release.

Now that we have a 4.0 release, we need to bring along the library ecosystem to enable applications to use it. vte, webkit and gtksourceview are some of the most notable libraries that tend to be used together with GTK. We expect GTK 4 ports of these to be available soon.

If more serious issues show up, we will do a 4.2 release in time for GNOME 40, otherwise we might wait until the summer for that.

What the future will bring beyond GTK 4 remains to be seen. We have some fun things in the pipeline, but we would also like to hear what features application developers would like to see in GTK. Tell us!

We will celebrate the 4.0 release with an (online) gathering this coming Friday. Feel free to drop by!